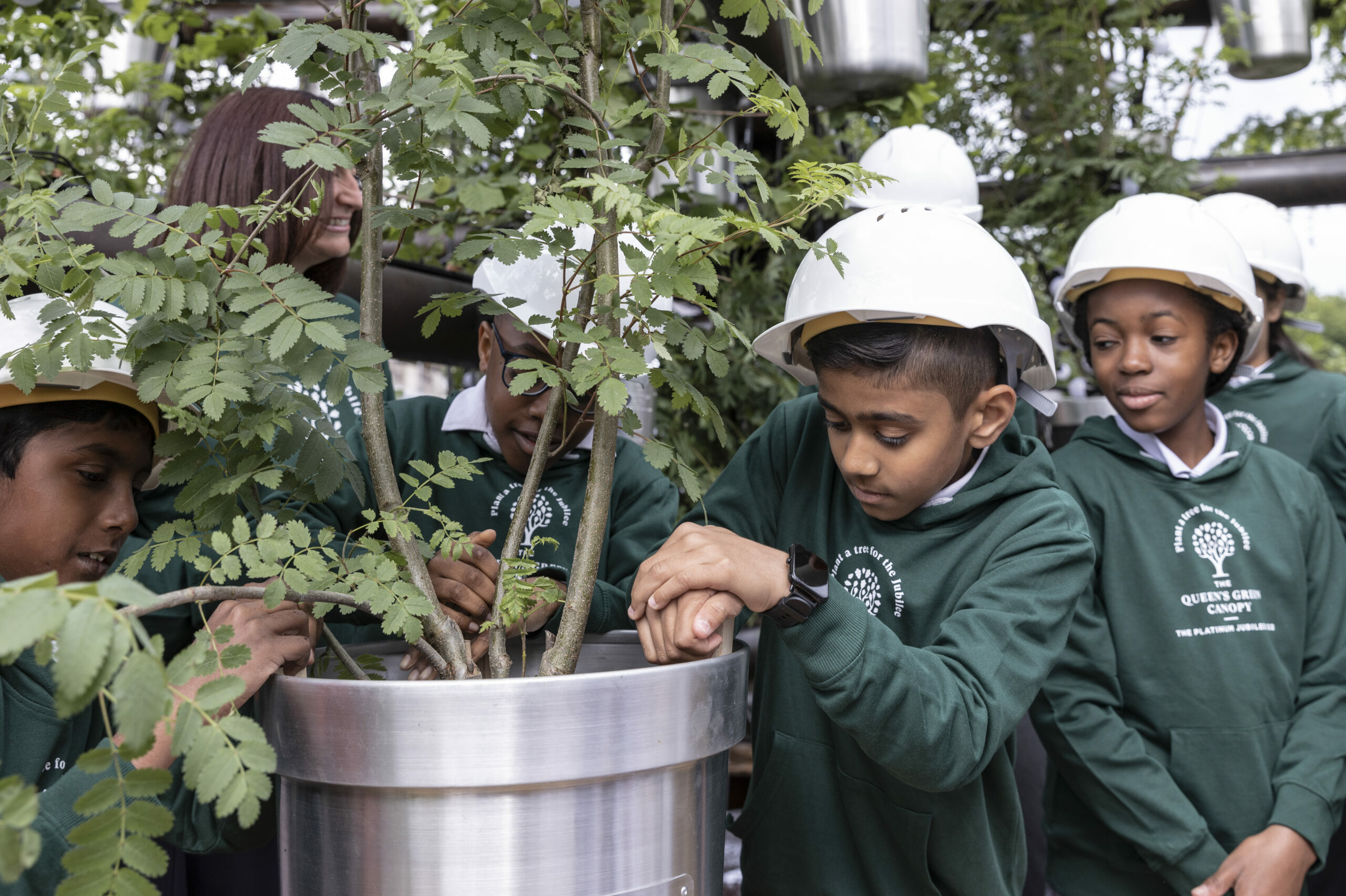 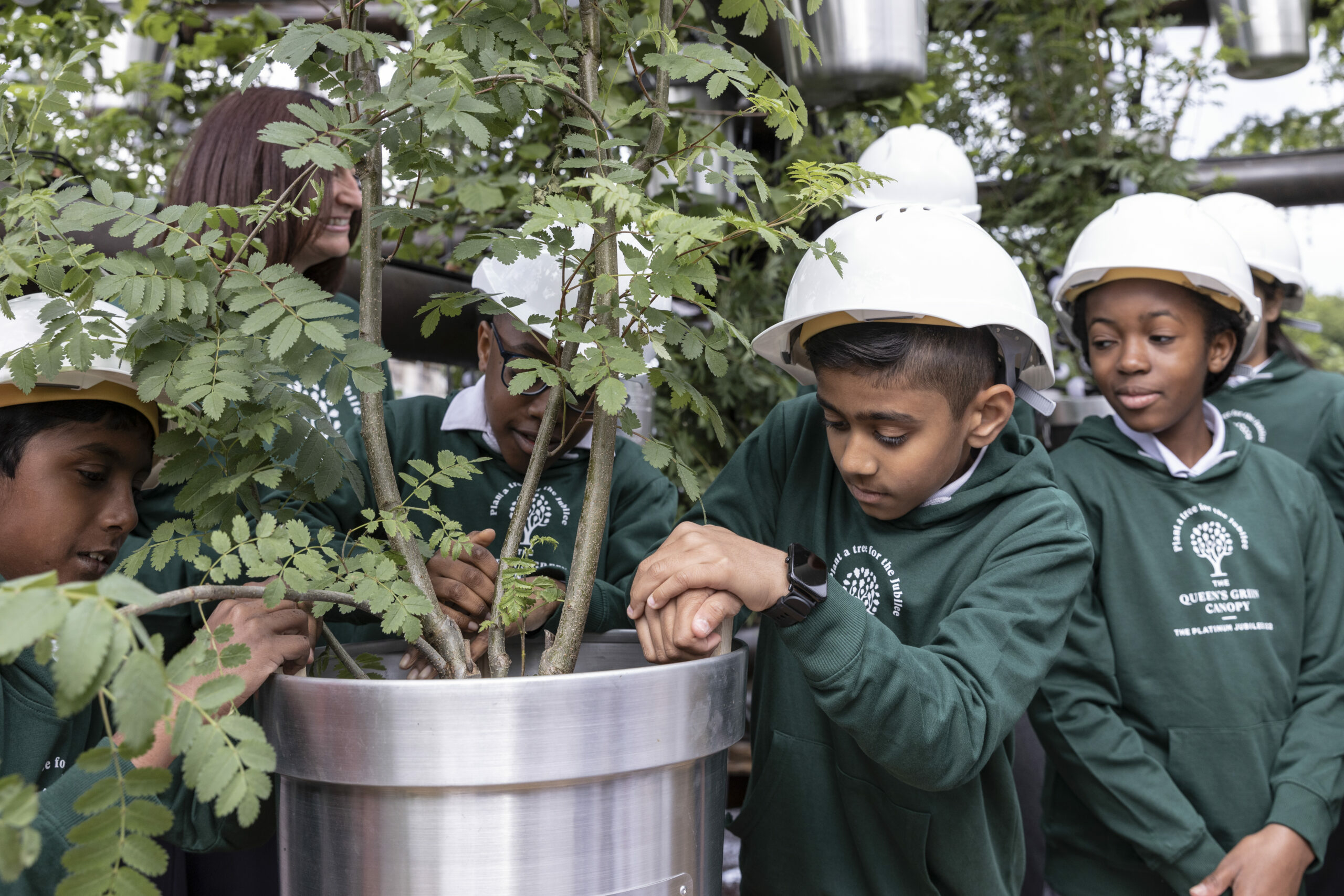 A group of Queen’s Green Canopy Junior Foresters visited Buckingham Palace to help prepare the last branches of the “Tree of Trees” ahead of the final piece of the trunk being lifted into position at the top of the 21-metre sculpture.

An exciting centrepiece of the Platinum Jubilee weekend celebrations, the Tree stands tall as a message of hope, regeneration and optimism to the nation and the world. Designed by Heatherwick Studio, the sculpture reflects the joyful Jubilee tree planting which has swept the nation as part of The Queen’s Green Canopy (QGC), inspiring over a million trees to be planted during its first season, from October 2021 to March 2022.

As recently announced, the Tree will be illuminated as the Principal Beacon during a special ceremony at Buckingham Palace on the evening of Thursday 2nd June.

As the project nears completion, Junior Foresters from Coppice Primary School and William Torbitt Primary School in Essex helped to place the last of the 350 British grown trees which make up the sculpture into aluminium pots embossed with Her Majesty’s cypher. As the pots were added to the branches, the children learned about the Tree’s bespoke watering system which operates through pipes going directly into each pot. They also got involved in weaving LED lights through the trees which will illuminate for the Beacons ceremony.

The living sculpture seeks to put the importance of trees and nature at the heart of this historic milestone to celebrate Her Majesty, who has planted over 1,500 trees throughout the world during the course of her 70-year reign.

After the Jubilee weekend, the 350 trees in their special pots will be gifted to selected community groups and individuals to celebrate their work and inspire the next generation of tree planters across the nation. The trees will be distributed evenly across the UK in proportion to the population. The QGC is working closely with Her Majesty’s Lord Lieutenants in each county on the selection process, with priority given to those seeking to create a cleaner, greener environment which will work towards a living legacy for the Platinum Jubilee.

The Queen’s Green Canopy is a not-for-profit initiative. The “Tree of Trees” sculpture has been supported by Bloomberg Philanthropies.

Thomas Heatherwick said: “This acts like a beacon sending one simple, eternal message that trees are the super-heroes of our towns and cities and matter much more to our lives than we realise. It’s been made by a team of welders, arborists, designers and fabricators from right across the country, all of us playing a part in this huge community campaign that’s literally transforming the landscape and honouring The Queen.”

Sir Nicholas Bacon, Chairman, The Queen’s Green Canopy said: “The Tree of Trees offers a message of hope, regeneration and celebration to people and communities around the world. I am delighted in the way that everyone has come together across our Nation to ‘Plant a tree for the Jubilee’. I hope that this wonderful living sculpture, showcasing 350 British-grown trees, will inspire even greater tree planting in the autumn, when we also look forward to celebrating with those communities, who have led the way and who make our country so special.”

Michael R. Bloomberg, founder of Bloomberg L.P and Bloomberg Philanthropies said: “The Tree of Trees is a powerful symbol of the Queen’s leadership and what communities can achieve when they come together for climate action. Our team at Bloomberg continues to lead local greening and sustainability projects around the world, and we’re glad to support the Queen’s Green Canopy at this special moment for the UK.”

Background – The Tree of Trees

The Tree of Trees has been created with materials and talent from across the country. Materials have been sourced wherever possible from local suppliers within the United Kingdom to minimise transportation, energy use and waste.

Provided by Barcham’s Nursery in Cambridgeshire, the 350 British grown trees include the following species:

Provided by Cleveland Steel in Yorkshire, the design has been optimised to maximise the use of old surplus steel, keeping the level of embodied carbon to a minimum.

The sculpture has been fabricated and installed by Millimetre in Hove, and project managed by Rise International. The timber support, deck and joists are Forest Stewardship Council (FSC) certified.

Information about the QGC is available: www.queensgreencanopy.org 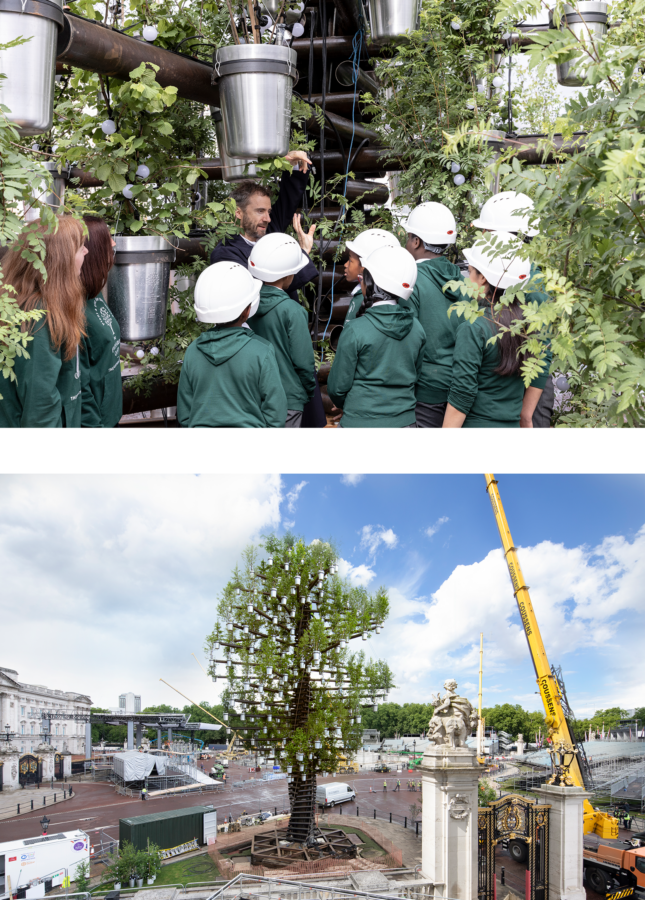