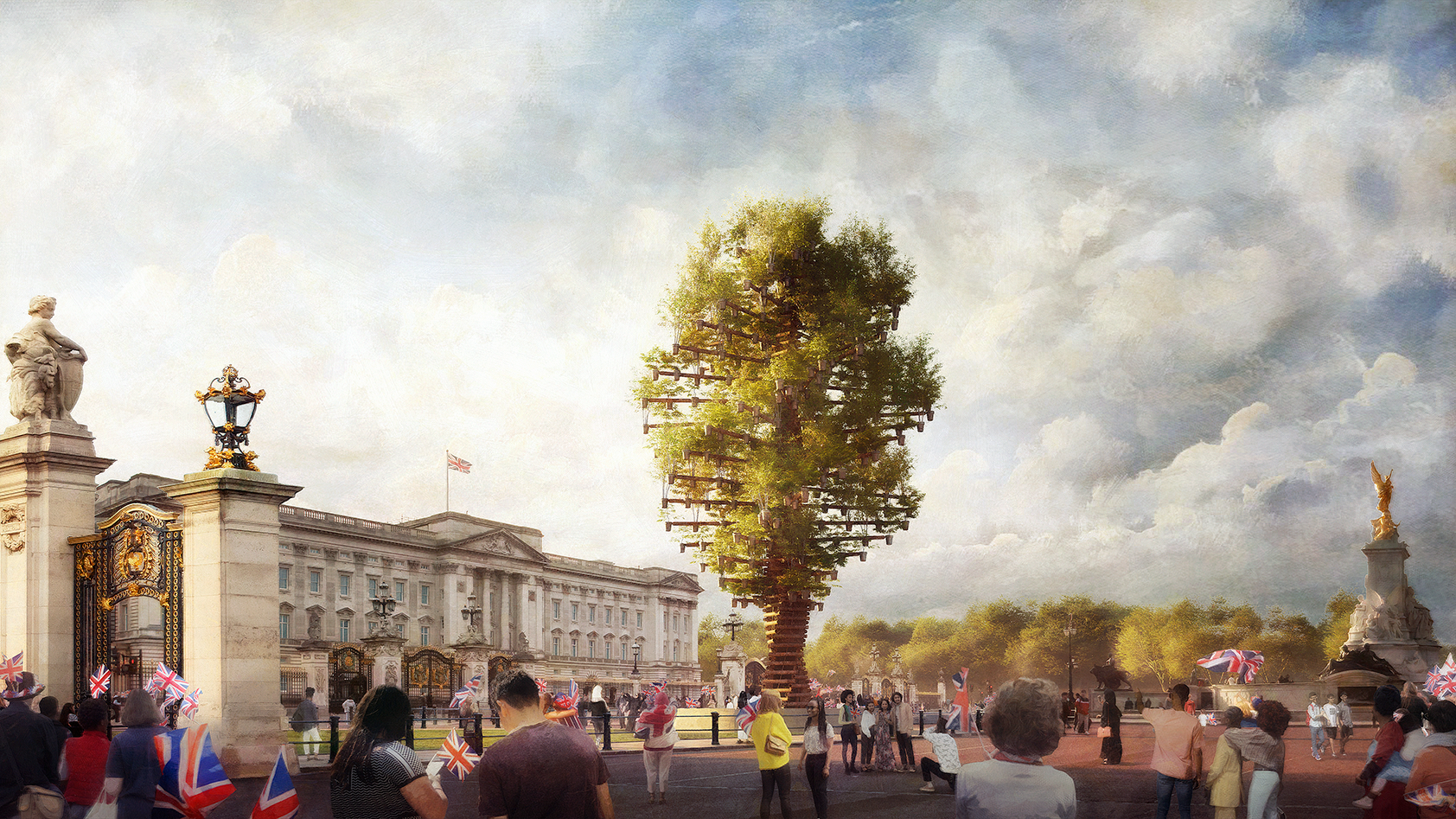 A spectacular 21-metre “Tree of Trees” sculpture featuring 350 British native trees will be created outside Buckingham Palace as a centrepiece of The Queen’s Platinum Jubilee weekend celebrations in June.

Designed by Heatherwick Studio, the sculpture reflects the joyful Jubilee tree planting which has swept the nation as part of  The Queen’s Green Canopy (QGC), inspiring over a million trees to be planted during its first season, from October 2021 to March 2022.

The sculpture seeks to put the importance of trees and nature at the heart of this historic milestone to celebrate Her Majesty, who has planted over 1,500 trees all over the world throughout the course of her 70-year reign.

The 350 trees will be set in aluminium pots embossed with Her Majesty’s cypher. After the Jubilee weekend, the trees will be gifted to selected community groups and organisations to celebrate their work and inspire the next generation of tree planters across the nation. The trees will be carefully stored during the summer ahead of distribution at the start of the planting season in October. Further details on the selection process will be announced in due course.

The Queen’s Green Canopy is working to help green our cities, renew the countryside and bring communities together. Working with partners, a key element of the QGC includes a programme to support urban greening projects in areas of high socioeconomic deprivation and low canopy cover. With trees and nature central to many of their designs, Thomas Heatherwick and his team’s creative approach closely reflects this theme.

The sculpture is made from reclaimed and new steel with materials and expertise sourced from local suppliers up and down the country, from Cleveland and Hull to Cambridgeshire and Hove. The Queen’s Green Canopy is a charitable initiative. The “Tree of Trees” sculpture has been supported by Bloomberg Philanthropies.

Thomas Heatherwick said:
“It’s an honour for us to be making the Tree Of Trees. The structure, created from 350 British native trees and recycled steel, is coming together from workshops and nurseries across the country as one part of an incredible community campaign that’s literally changing the landscape of our nation.”

Michael R. Bloomberg, founder of Bloomberg L.P and Bloomberg Philanthropies said: “Bloomberg is glad to support this inspiring installation celebrating what’s possible when communities come together to build a brighter future. Trees bring so many immediate and long-term benefits, and our foundation has been helping communities around the world plant more of them, including London, our company’s second home. We’re looking forward to seeing this partnership with The Queen’s Green Canopy and a brilliant designer, Thomas Heatherwick, come into bloom.”

Visualisation by PicturePlane for Heatherwick Studio